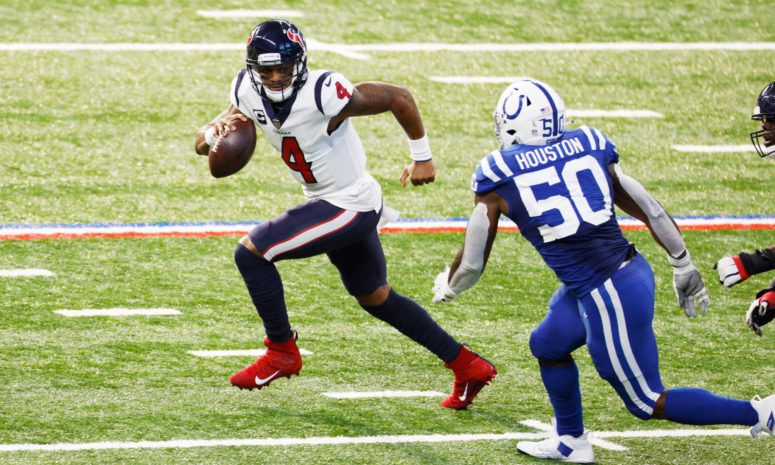 INDIANAPOLIS, INDIANA - DECEMBER 20: Deshaun Watson #4 of the Houston Texans tries to avoid the tackle of Justin Houston #50 of the Indianapolis Colts in the first half at Lucas Oil Stadium on December 20, 2020 in Indianapolis, Indiana. (Photo by Michael Hickey/Getty Images)

The Houston Texans didn’t say much on the situation surrounding Deshaun Watson.

General manager Nick Caserio spoke to the media at a press conference on Tuesday and confirmed that the team is handling it on a day-to-day basis.

“We’re day-to-day in terms of handling that,” Caserio said. “Once the information becomes more relevant and prevalent, then we’ll handle it accordingly. My philosophy from the beginning has always been to do the right thing by the Houston Texans organization and we’re going to continue to do that here moving forward.”

Watson sat out the entire 2021-22 season after being accused of sexual assault by more than 20 different women. There are 22 active civil lawsuits against him, and he’s also still facing a criminal investigation.

The Texans are asking a hefty price for Watson for other teams that want to trade for him.

Per Jeff Howe of The Athletic, the Texans want a total of five-to-seven assets in return, including three first-round picks. With that price, it’s likely that teams will want to wait and see what happens until the findings are made public.

Right now, the Texans will likely make moves with the assumption that Watson probably won’t be on the roster next season.