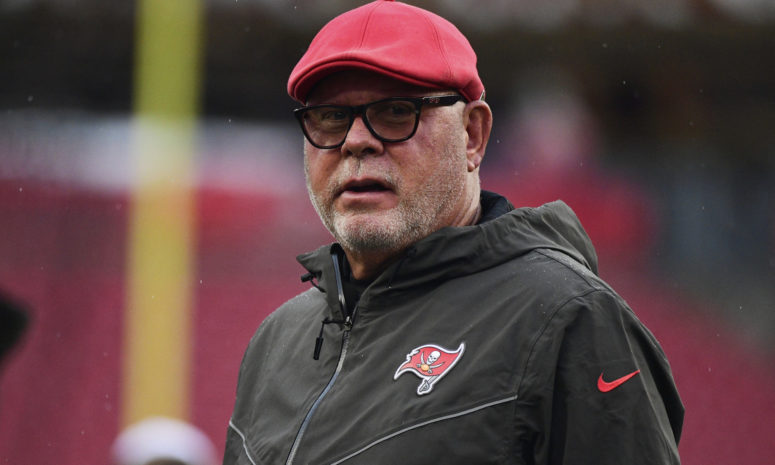 TAMPA, FLORIDA - AUGUST 16: Head coach Bruce Arians of the Tampa Bay Buccaneers looks on during warm-ups before a preseason football game against the Miami Dolphins at Raymond James Stadium on August 16, 2019 in Tampa, Florida. (Photo by Julio Aguilar/Getty Images)

The Tampa Bay Buccaneers must pick someone to take on the unenviable task of replacing Tom Brady under center.

Looking at their current roster, onlookers may assume the 2020 NFL champions will sign or trade for a successor. While that’s still on the table, head coach Bruce Arians told NFL Network’s Andrew Siciliano that he’s also considering his in-house option.

“Door No. 1 right now is Kyle Trask,” Arians said. “You know, we drafted him last year in the second round. (I) love him. Been with him for a year. Blaine Gabbert is a free agent, but he’s been with me, knows that system inside and out. So those guys, I’m very comfortable with. But we still have to go look behind door No. 2. Door No. 2 this year is a trade. You got to have a partner.”

Drafted with the 64th pick last year, Trask has yet to throw a single NFL pass. Arians wouldn’t dismiss the 23-year-old, but he said they’re exploring options on the trade market.

“We called everybody, just like every year,” Arians said. “We called about all the players you think they might want to trade and have healthy conversations and see what it would take, what it wouldn’t take. That’s probably been going on for a month.”

He also said “I don’t see it” because most other teams with a potentially available quarterback don’t have a replacement waiting.

Perhaps Arians is just playing coy, but he appears to at least be considering Trask as a legitimate candidate to start this season. Or maybe there’s a free-agent signing or draft pick waiting behind door No. 3.