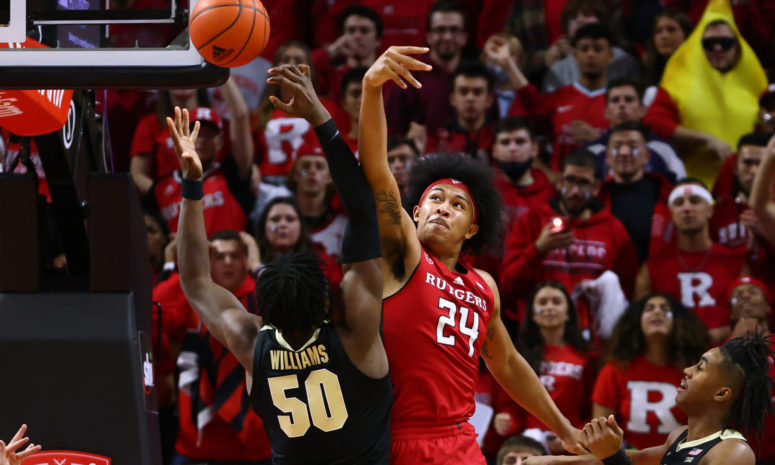 PISCATAWAY, NJ - DECEMBER 09: Trevion Williams #50 of the Purdue Boilermakers and Ron Harper Jr. #24 of the Rutgers Scarlet Knights battle for a rebound during the first half of a game at Jersey Mike's Arena on December 9, 2021 in Piscataway, New Jersey. (Photo by Rich Schultz/Getty Images)

With the game tied in the closing seconds, Ron Harper Jr. nailed a game-winning three to give the Scarlet Knights a 66-63 victory over the Indiana Hoosiers.

Ron Harper Jr. with the game-winner. It’s a devastating development for the internet in Indiana.
pic.twitter.com/MIPNUM9XC3

While not as wild as his deep buzzer-beater to stun then top-ranked Purdue in December, the senior’s latest heroics couldn’t have come at a better time. Having lost the last three games, Rutgers needed a win to keep its bubble from bursting.

Meanwhile, it’s a heartbreaking setback for a Hoosiers squad that has now dropped six of their last eight games.

Rutgers will close its regular season by hosting Penn State on Sunday afternoon. Indiana will look to bounce back on the road against Purdue this Saturday.