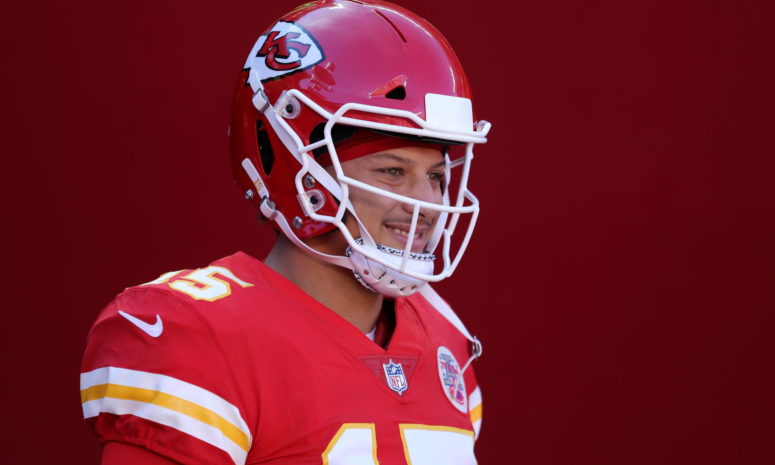 KANSAS CITY, MISSOURI - NOVEMBER 01: Patrick Mahomes #15 of the Kansas City Chiefs takes the field prior to their game against the New York Jets at Arrowhead Stadium on November 01, 2020 in Kansas City, Missouri. (Photo by Jamie Squire/Getty Images)

There likely isn’t player in the National Football League who is less likely to be traded than Kansas City Chiefs quarterback Patrick Mahomes.

That didn’t stop one NFL team from inquiring about Mahomes’ price, though.

According to a report from ESPN, the Washington Commanders called every NFL team about their quarterback situation – that includes the Chiefs and Mahomes.

Washington is in need of a starting quarterback. It’s not going to be Patrick Mahomes, though.

According to @john_keim, Washington has reached out to every team to inquire about a QB’s availability and the cost. The team started its search with a list of 42 QBs

Chiefs fans are pretty amused about the idea of an NFL team inquiring about Patrick Mahomes’ trade price.

I would give anything to hear the convo between WAS and Brett Veach about Mahomes. https://t.co/sjazagFJmy

I know #ChiefsKingdom had there reactions about Patrick Mahomes… but I want to know what that conversation would be in the mind of #BillsMafia and @JoshAllenQB @stephietweets thoughts??? https://t.co/JB3f9DzMGr

Theoretically, if there was an offer the Chiefs would say yes to, what would it be? https://t.co/8OTuqT0eF6

"Hello, This is Brett"
"Hey, Commanders here. Was wondering if we could discuss a possible trade for Mah-"
Brett: https://t.co/H6kEaAJtlR pic.twitter.com/RS3DWJWGJn

Earlier this week, Bucs head coach Bruce Arians said it would take five first round picks to consider trading Tom Brady (if he came out of retirement, that is).

What would it take to trade Mahomes? 10 future first round picks? In reality, there probably isn’t an offer that the Chiefs would say yes to.

Washington, meanwhile, will have to look elsewhere for its veteran quarterback for 2022 and beyond.