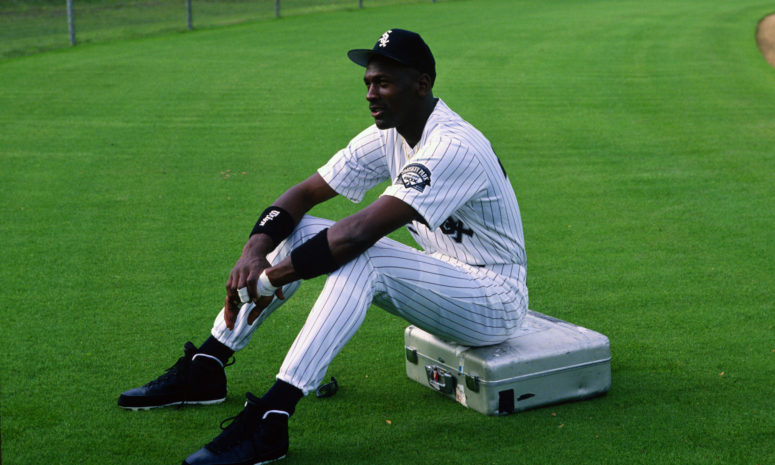 BIRMINGHAM, AL - CIRCA 1994: Michael Jordan #45 of the Birmingham Barons the Double A minor league affiliate of the Chicago White Sox sits on a camera case before a photo shoot circa 1994 at Hoover Metropolitan Stadium in Birmingham, Alabama. Jordan played for the Barons from 1994-95. (Photo by Focus on Sport/Getty Images)

Michael Jordan’s MLB career didn’t last long. But his 1994 season with the Scottsdale Scorpions produced one iconic moment in his baseball career.

A video has been going viral today of a clip from a 1994 Arizona Fall League game. Today marks the 28-year anniversary of a famous triple The Airman hit in that game.

Interestingly enough, Jordan crossed paths with another icon – Terry Francona – that season with the Scorpions. Francona was the manager in Scottsdale at the time and was on the call when Jordan was at the plate.

When Jordan hit the ball, Francona could not contain his excitement as Jordan ran the bases and dove into third. That appearance would precede a stint in the Southern League with the Birmingham Barons.

Michael Jordan hitting a triple in the Arizona Fall league with his coach, Terry Francona on the mic 🔥 pic.twitter.com/VOSVs7HBX3

But Michael Jordan wound up not playing in a Major League Baseball game. He was decent but hardly dominating in the Southern League, hitting for .202 with 88 hits, 17 doubles, one triple and three home runs in 127 games.

Jordan wound up leaving baseball in 1995 due to the 1994-95 MLB strike and returned to the NBA. He would lead the Chicago Bulls to three more NBA titles before retiring for a second time after the 1997-98 season.

We’ll never know what Michael Jordan would have been like as an MLB player if he had stuck around longer. But there were still some big moments in that short time he had in baseball.